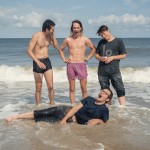 Stereogum:
“Canshaker Pi make a supercharged, highly rhythmic brand of indie rock that blends pysch, punk, and noise. That may sound like calamity, but it’s well-tempered with tight playing and opportune shifts in energy and aesthetics.”

DIY:
“A blustering romp of fuzzy guitars, big joyously off-kilter guitars and needling riffs, it’s a barely-contained sprint of indie rock (in the purest sense of the term) that hardly pauses for breath.”

Clash Magazine:
“Reference points could include Sebadoh, Guided By Voices or Pavement themselves, but what’s most impressive is the sound of a young voice gathering confidence.”