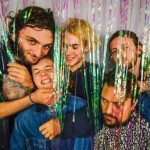 ‘Down at their rehearsal space / studio / party area, Whistlejacket have finally found a source of freedom. Able to make whatever noise they like whenever they like, the band have developed a sound that is by turns blistering and soothing, pastoral and quick direct.’ Clash

“London’s Whistlejacket are a bit of an unknown quantity at this moment in time. We suspect that anonymity won’t last for long if their recent batch of Slowdive influenced demos are anything to go by.” – Drowned in Sound