The Fur Coats (US) – psychedelic / garage 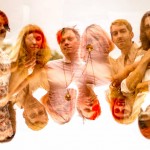 The Fur Coats are a psych-soul-pop band from Portland, Oregon fronted by American sweethearts Chris Karl and Betty. Their lineup includes members of Wampire, Charlie Hilton and Reptaliens.

A swaggering live act, The Fur Coats have gained considerable local following since their inception some five years ago. Following the self-release of their EP, Desperate, the band has been getting regular local radio play, was featured on the PDX POP NOW! compilation and music festival, and toured Europe in the Spring of 2017. They recently impressed NPR with their Tiny Desk Contest entry and were reviewed on the All Songs Considered blog. The Fur Coats just released a series of three singles, conceptualized in shifting the collective perspective from dark to light. Look for the full EP, titled “Mirror Gazing”, scheduled to be released Summer of 2018!