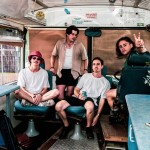 Sydney gaze-pop outfit PLANET is the culmination of several years of trial and error in songcraft, performance and production. They were brought together by their shared love of music: old and new, foreign and domestic. Drawing influences from past and present the four-piece combine pop laden guitar hooks with soaring vocal melodies. The result is a sound which is reminiscent of Britpop but remains undeniably Australian.

In 2018 the band released their debut EP ‘Waking Eight’ while touring UK & Europe. The band are currently in the studio recording their debut album which is due for release in 2019.