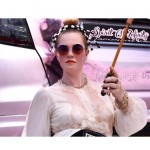 From Iowa to France, the voice of COCO BANS weaves around the globe with instantaneous pop anthems and intimate hybrid folk songs. The American singer-songwriter, having already collaborated with some of the biggest and most promising artists (Lil Wayne, Julian Perretta, Fakear, Kiddy Smile, Jabberwocky…), stormed onto the scene in October 2018 with debut single “Make It Up” and a packed MaMA Festival show. Rolling Stone picked COCO BANS as 1 of their 5 stand-out artists (of 150+ present at the festival) stating she “has all the makings of a future star… and more!”

COCO BANS debut EP Fantasy & Parables was released on February 28, 2019. A collection of songs that explores our internal worlds and the stories we tell ourselves to survive. It is a narrative in 6-parts of struggle and determination and coming out the other side. 6 songs true to her image: folk-gospel background + smash magic.